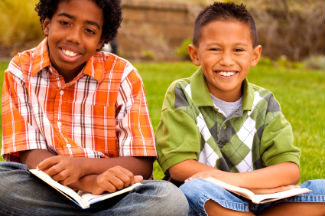 In recent years, literature for children has become much more diverse so the material is available, however this does not mean that all multicultural books are the same: some books are better than others. In fact, cultural authenticity in children’s books can range from extremely authentic to completely inauthentic, and in some cases, a book may be downright racist and offensive. The issue of selecting multicultural books for use in the classroom can be tricky because not everyone is equipped to make these value judgments about books depicting other cultures. How do you know if a children’s book you’re thinking of sharing with your students accurately and authentically portrays the culture of its characters? Are there warning signs to look for? Well, to answer those questions, I thought I’d put together a list of the ten telltale signs of an outstanding multicultural book. You can think of it as a sort of checklist to help you determine which books are more suitable than others. Here’s what I came up with.

1)      The book avoids offensive expressions, negative attitudes, or stereotypical representations. You’ll know a racist, sexist, or other offensive stereotype when you see it; trust your instincts. If you feel that you have no instincts in this area, then do some research. Historically, what are some of the negative stereotypes that have been associated with a particular culture? Once you know what the stereotypes are, look at both the pictures and the text of a book for the presence or absence of such depictions.

2)      The author of the book is from the culture being depicted. If not, be wary. A cultural insider is more likely to get it right. An good sign to look for is a biography explaining the author’s connection to the culture, or an author’s/illustrator’s note explaining the sources of information the author and illustrator drew upon in writing and illustrating the book.

4)      The book exemplifies good storytelling. The book inspires, amuses, and tackles larger themes relevant to children, like coming of age or coming to terms with the past. The plot is accessible, interesting and makes sense. The characters are well-developed, convincing, and memorable. The story should be worth revisiting again and again. If the author is not dealing with social issues, that’s a good sign. Social justice books have their place in the classroom, but too often, books depicting minority or “parallel” cultures adopt a patronizing, “poor them” tone.

5)      The book avoids any suggestion that there is a single cause or simple answer to the socio-historical dilemmas of the culture being represented. When issues of human rights and oppression are central to the story, the book addresses those issues in a way that emphasizes the dignity and resilience of people living under oppressive conditions. Children should perceive the characters as competent problem-solvers, responding in positive ways to the challenges they confront.

6)      The story includes words and phrases from the culture being depicted. The inclusion of Spanish words in a book about a Mexican family for example, provides realism and shows respect for the culture. Give extra points if the book comes with a glossary at the back, and give extra-extra points if the book includes a pronunciation guide as well.

7)      The book is explicit and precise about the cultural roots of the group being depicted. For example, for books depicting Caribbean characters, the author avoids vague references to “island people” and “island culture,” and rather, names and accurately represents the specific Caribbean country the character(s) comes from. For Native American children’s books, the book depicts characters from a specified native nation, as opposed to generic Indians, and the descriptions and illustrations in the book show an awareness of the particular customs, history, dress, and ways of speaking of the particular Native American nation. Although books about immigrant cultures in America are valuable, assign extra points if the book is set in or touches upon experiences in another country.

8)      The book does not set different cultures or groups in opposition to each other. For example, for a book depicting Native Americans, the story avoids what children’s author Joseph Bruchac refers to as “The Dances with Wolves Syndrome”― books in which all Indians are noble and all white people are bad.

9)      The story accurately reflects the values inherent to the culture being depicted, i.e., the ideals, principles or beliefs that a cultural group considers to be important. For example, a book depicting Asian-Americans might reflect the values of cooperation and a respect for family and tradition.

10)  The story acknowledges the diversity of experiences within a particular cultural group. For example, the experiences of African-Americans in the South do not necessarily resemble those of the North, and inner-city situations do not parallel experiences in rural settings. A good multicultural book shows an awareness of such differences.

There you have it! Ten tips to help you choose the best multicultural books for use during reading instruction. Look out for my next blog in which I discuss some good resources to help teachers and parents track down multicultural children’s books suitable for different types of readers.

I am much indebted to Joseph Bruchac, Gary Soto, Floyd Cooper, Patricia Polacco, and Yumi Heo for some of the above ideas on how to select appropriate multicultural children’s books, as well as to a range of thinkers on the topic, such as Drs. Weimin Mo and Wenju Shen.

Summer Edward is a Ginkgo Prize-longlisted author and has written several books for young readers, amongst them The Wonder of the World Leaf, Renaissance Man: Geoffrey Holder’s Life in the Arts, and First Class: How Elizabeth Lange Built a School. Summer earned a Master of Education at the University of Pennsylvania. Learn more at summeredward.com