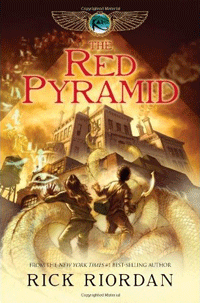 A brother and sister learn that they are descended from ancient Egyptian royalty and have unexpected magical powers. They use these powers to confront a series of evil Egyptian gods and their minions, in order to rescue their father, who in turn has sacrificed himself to rescue their mother. The adventure is non-stop, but is tempered throughout with Riordan’s characteristic humor that places the quarrels and tender moments of the siblings above gods and magic.

The novel is told in alternating first-person voices. First the brother narrates a few chapters, then the sister, and so on. Students should be aware of the differences between author and narrator, as well as the difference between first, second and third person narrative voices. Students should also describe the relative merits of using first-person vs. third-person narrative voice.

The novel is a mystery in the sense that some of what is important in the early going is not clear to the main characters, nor to the reader. Some key back story information is learned within the first half of the book, but even more questions are raised near the end, as this is the first work in a series.

The main male character, a 14-year-old American boy, is relatively accessible to U.S. readers, but his sister has been raised in England and uses British slang and terminology. Examples include:

The novel also incorporates a good deal of Egyptian mythological and archaeological references. These are typically defined when introduced, but students would benefit at a minimum from defining these terms:

Otherwise, the novel’s word use is straightforward. Students will not encounter challenging figurative language.

Have students define the words above and identify key Egyptian terms defined in the text, such as “shabti.”  Have students then locate images online of each item and paste them beside the definitions.
Review the difference between hieroglyphics and alphabet-based written languages. Locate a hieroglyphics chart and distribute to students.
Then have students write a brief review  of the work – two or three sentences – and convert it to hieroglyphics from the chart. Students then exchange reviews to see if they can decipher each others’ reviews.

This book is a solid 4 on a scale of 1 to 5. Riordan proved himself a master of placing ordinary likable kids at the center of a maelstrom of historical fun when taking on the Greek pantheon in the “Percy Jackson and the Olympians” series. Here he incorporates ancient Egypt and thoroughly modern teenagers to excellent effect. The plot is enjoyably far-fetched yet comprehensible, the banter is witty, and the stakes are high. Readers will anticipate the next installment eagerly.