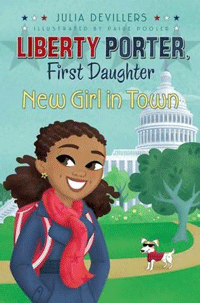 Nine-year-old Liberty Porter is the daughter of the newly elected President. As she starts a new life in the White House and at a new school, she finds that being well-known has its costs. Her struggles to find friendships she can trust will feel familiar to most elementary-school students, and her spunky charm will appeal to them as well.

The text is appropriate for third or fourth grade students reading at age level. Some political terms are used in context, briefly defined. Before reading, students should learn or review an outline of the roles of the Congress (to make laws) and the President (to sign or veto laws, and to make sure they are carried out.)

Identify each of the following terms from the text for students, or have them research the definitions themselves:

President: Political leader of the United States.
First Lady: Wife of the President.
First Daughter: Child of the President
Inauguration: Formal placement of the President in his new role
Smithsonian Museum: The “Nation’s Archive,” houses artifacts considered important in American History.
Washington, D.C.: A city separate from other states that is home to the important official buildings, including Congress and the White House
Secret Service: Official bodyguards whose is to protect the President and his family at all times.
Secretary of Education: The person in charge of making sure all laws about education are carried out well.
The Cabinet: The top advisors to the President.

Have students write about their first day at a new school, or the first day of a new year at school. Have them address:

Then have them compare their experiences to those of Liberty Porter by having students answer the same questions for her:

Have students draw a conclusion: who had an easier time getting used to a new school?

This book receives 4 out of 5 stars. Although the central character is engaging, peripheral characters are fairly predictable. However, the political setting and the unusual issues of a First Daughter adjusting to school life make this a fun work of fiction that can comfortably be used to educate students about governmental structures and current events.