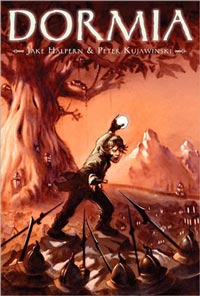 Twelve-year-old Alfonso Perplexon only has one unusual trait: he sleepwalks. But when he does so, he accomplishes remarkable feats. It turns out he is a lost heir of a mysterious civilization of accomplished sleepwalkers. Their lost but appealing land is threatened by extinction and only Alfonso can save it, by replanting the tree that is its source of life. To do so, he must gain control over his own sleeping self and defeat a host of enemies.

Age-appropriate use of standard literary elements for a work of fiction. One concern is the believability of the setting. The book describes a fantasy land – Dormia – that is supposedly in the Ural Mountains, which exist. At the same time, the invented history of Dormia is also described in detail. Yet the authors also take good care to describe real geography and history. For readers who are not familiar with the sort of mingling of real and fictionalized that is common in standard fantasy novels, this might get confusing.

Have students keep a dream journal, recording any dreams they have and determining the meaning for themselves.

Alternatively, teach/review the concept of the subconscious. Have students discuss and/or write about any three of these questions:

For whichever question(s) students choose to focus on in their writing, have them compare their response to Alfonso’s in Dormia. For example, if they choose to answer, “What exactly is sleep?” have them also contrast that answer with an explanation of what sleep is for Alfonso.

Distribute blank maps of Europe (available at http://geography.about.com/library/blank/blxeurope.htm) along with physical and geographic maps of Europe. Have students label countries and significant physical features on their blank maps, with particular attention to Ural Mountains.”

This book earns a solid three stars out of five. The concept of magic powers during sleepwalking is compelling, as is an entire society made up of people with this unusual ability. Little touches such as a rare plant that is cultivated by a boy and must be conserved by him against all dangers are unusual and appealingly off-beat. However, once the plot is established, its twists are predictable to anyone familiar with the genre. Secondary characters are quirky but sacrifice believability. The writing style is decent, but not spectacular. This book is best recommended for students who have not read thousands of works of fantasy.