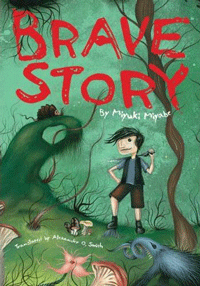 Japanese schoolboy Wataru faces an acrimonious split between his parents, shocking him from a complacent childhood. A fantasy world opens to him, presenting an opportunity to reverse his ill fate at home through a parallel quest to save the fantasy land. His adventures countering prejudice in the fantasy land lead him to greater courage, ultimately saving the land and coming to important new understandings about himself and his parents.

The novel is essentially told in a straightforward manner, but American readers will not necessarily be familiar with certain Japanese elements. Most importantly, the family structure and manner of relating are much more restrained, as is fairly typical in Japan. U.S. readers might wonder why the boy knows so little of his parents’ secrets, and why they are so closed to him in their affections. Similarly, his own reticence to speak up are not to be understood as cowardice, but as cultural artifacts.

Teachers might want to discuss culture as it impacts the individual, and the challenge of the individual standing against the culture.

The book also spends quite a bit of time in one reality before shifting to another. In other words, readers expecting a fantasy must read through a family drama until page 226 of 810. Yet after that point the story takes place almost entirely in the fantasy land until the very end.

The multiplicity of various lands and their names, along with fantasy creatures can get confusing, but is not particularly important.

The fantasy land in the book (called “Vision,”) is a projection of the protagonist’s psyche. His imagination, desires, fears, etc. are what populate the land and give him his quest – to conquer his own fears and prejudices.

Have students embark on a similar quest. Ask them to list at least one life goal, one social fear, and create a few magical creatures. Lastly, have them create a magical version of themselves. What level of health, happiness, wisdom, etc. does their magical self have that they don’t – in other words, in what ways do they wish they could improve?

Have them put all this together into a two-page story in which they describe their own character, the fantasy characters, and the quest to solve some personal problem.

For example: “In my fantasy land called Lampoon, I would have more courage so that I could tell my friends when I think they are behaving in damaging ways (examples). To succeed in my quest, I would have to climb Mount Resistance, gaining more courage at each of the seven heights.” Etc.

This book gets four out of five stars. It is highly imaginative and cleverly integrates real-world challenges with a complex fantasy land. The plot does drag in some parts, with many magical adventures seemingly written for their own sake and not to advance the plot. Also, the very best character, an entertaining sidekick, is abandoned after the first quarter of the book. Still, American readers won’t find another journey into the imagination of a Japanese teenager that feels as real yet as entertaining.