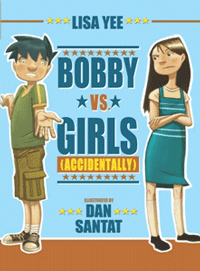 Bobby and Holly have been friends forever, but in the 4th grade that’s no longer as simple as it once was. Each of them has other friends letting them know that boys and girls can’t just be friends. Feeling threatened, Bobby begins to oppose Holly in every way he can, but ultimately his heart isn’t in it.

The book is generally accessible to 4th-graders reading at grade level, but has several challenging features. Frequently, a character has an opinion that is voiced by the narrator, rather than the character.  For example, the following statements are not lines of dialogue, but part of the narration:

— It was dangerous to be spotted by someone from school.
— What he wanted was a black Labrador retriever, the best animal in the entire world.
— She was freakishly tall for someone who was nine years old.
— Stuffed animals were for little kids.

This style choice can cause confusion. Teachers might want to teach or review the concept of a narrator. Alternatively, present the list above to students and ask them to explain why the words are not in quotes, given that they are opinions. Ask: “Whose opinion is this?”
Another potential difficulty is that the author integrates real-world proper nouns with invented ones. Identify the following for students, or have them identify:

By contrast, a major feature of the story is the “Koloff Tree,” which is presented as real, but is fictional.

Lastly, a number of challenging words appear that are not contextualized, but are not crucial to the plot. Students might define these for extra credit:

This book gets five out of five stars because it is an excellent portrayal of 4th-graders as they are, not as others might want them to be. Both main characters are very well drawn, and the author also accomplishes a good deal with lesser characters such as Bobby’s father. The dynamic of boy vs. girl as it manifests at just this age is captured exceptionally well.