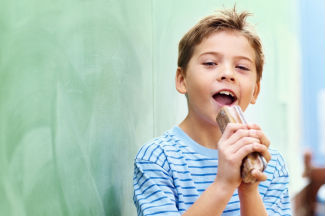 No matter how enthusiastic teachers are when it’s time for grammar lessons, it’s a sure bet he or she will be met with weary sighs from all corners of the classroom.  That’s why, as all smart teachers know, the best way to engage students in learning a “boring” topic is to spice things up with fun games or activities.

Here is a fun activity for teaching or reinforcing the concept of interrogative sentences.  It’s a game made popular on the television show Whose Line Is It, Anyway? – not exactly a show for young children, but it’s okay to adapt the idea!  The game is called “Questions Only.”

Read the two sentences out loud and notice the difference in inflection:

Are you going to the party tonight?

What are you going to wear?

Prior to explaining how to play the game “Questions Only” teachers can hand out a review sheet with that has 8 -10 sentences listed.  The list should be a mix of declarative, imperative, interrogative, and exclamatory sentences.

How To Play “Questions Only”

The teacher’s role is to create a scenario where students act out a scene and speak only in questions.  For example, the scene could be “Getting ready for the big game” and students would be the players on a soccer team.   Set a time limit for playing – 5 minutes is a good place to start.

Divide the class into two equal groups, if possible, and have students line up in two separate rows on either side of the classroom.  The first student in each row comes to the front of the class and role-plays the scene.  During the dialogue, if one student speaks in a sentence type other than interrogative, or if they take more than a few seconds to respond, the teacher sounds a buzzer or rings a bell.  That student takes a seat and the next student in line replaces him or her.

The winning team is determined by which row has the most students standing at the end of the five minutes.

This lesson is most appropriate for early middle school students but it can be adapted for younger students as well.  Teachers can set a limit on the number of questions to ask for each set of students or lengthen the time allowed for a response.